Like many other chronic conditions, Substance Use Disorder impacts individuals from all walks of life, it does not discriminate against the color of your skin, where you live, how you were raised, what language you speak, or how successful society has deemed you. While most individuals with substance use disorders would greatly benefit from a health-focused response to this epidemic, American policymakers have long taken a different approach. The lasting impacts of President Nixon’s 1971 declaration of the War on Drugs, however, have conditioned us to believe this disease does discriminate; that drug is a “poor problem” that it is a “black problem” that being a junkie is a choice, you can quit, just say no. Unfortunately, this is a damaging approach, and the damage has been done. Let’s take a look at how we got here, and what is happening around the country to improve the system. 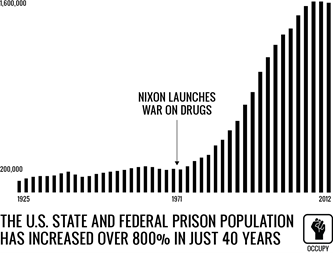 Following the declaration of the War on Drugs, we quickly saw the introduction of nationwide mandatory minimum sentencing for anyone possessing controlled substances, and subsequently, an unprecedented increase in the prison population across the country. Despite these policies seeming non-discriminatory on the surface, research shows young black are grossly over-represented in the prison population following possession charges, largely due to the specifics of mandatory sentencing laws.

Looking specifically at cocaine (crack vs powder), we can see that the amount of crack cocaine, a cheaper, less pure version of the drug found most commonly in low-income, non-white areas, is significantly less than the amount of powder cocaine one can possess before receiving the same sentence. Due to the discrepancy in possession limits, we see young black men incarcerated far more than any other population, despite the greater use of more potent forms of cocaine by white individuals, a phenomenon deemed “manifestly injustice” as early as 1991. Listen to Jay-Z explain how we got here and the impacts of these policies. 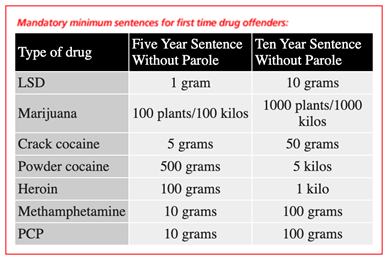 Individuals incarcerated for non-violent possession charges have historically not been provided any opportunity to improve their health, quality of life, or education while serving mandatory sentences, and thus frequently return to similar habits and lifestyles upon reintegration into the community. In fact, individuals recently released from custody are 128x more likely to experience an overdose event in their first two weeks of reintegration than their never-incarcerated counterparts. A 1997 study examining the cost-effectiveness of mandatory sentencing for cocaine users found that other policing strategies were more cost-effective, with the exception of high-level traffickers, a factor not included in sentencing guidelines. So, what does all of this mean? With only 11% of all federal drug-trafficking convictions being considered “high-level,” mandatory minimum sentencing was costly, harmful, and targeted specific populations.

Many individuals who become incarcerated while using drugs face a long road of withdrawal and recovery while in custody. Some jails and prisons have well thought-out protocols for this process while many have a “withdrawal cell” where inmates are given a mattress on the floor and left for three days while their bodies designate. If they’re lucky, they survive. Tyler Tabor and Jennifer Lobato did not make it through their withdrawals. Tyler and Jennifer died within days of being booked into Colorado county jails despite repeatedly requesting medical attention. Each of these deaths resulted in multimillion dollar legal settlements; a costly policy for Colorado’s justice system.

States across the country are actively working to undo the lasting impacts of these damaging policies. Individuals who are booked into the Rhode Island Department of Corrections (RIDOC) undergo timely screening for Substance Use Disorder and provided the necessary wraparound services to treat their condition. Programs like the RIDOC’s Medication-Assisted Treatment program have given inmates the opportunity to start recovery and become educated on their condition while incarcerated, leading to lower post-incarceration overdose rates. Colorado has launched a similar program offering MAT to qualifying individuals who have entered the justice system. With appropriate health care, education, and reintegration support, both states have seen a decrease in recidivism and post-incarceration overdoses.

Other trends in these efforts to undue unjust laws include jail diversion programs like DASHR in Denver, CO and CAHOOTS in Eugene, OR which send mental health providers and EMTs to respond to calls that do require assistance from law enforcement. These diversion programs aim to connect individuals with the necessary resources and supports to address the issue at hand rather than relying on the justice system. While still new and in pilot stages, these programs are likely to be much more cost effective than incarceration, which would reduce the money spent in the prison industry and allow us public health worker to continue innovative and meaningful work.

Providing opportunities for a better, healthier future is public health. What is your story?

Want to learn more about what’s happening? Check out these resources.